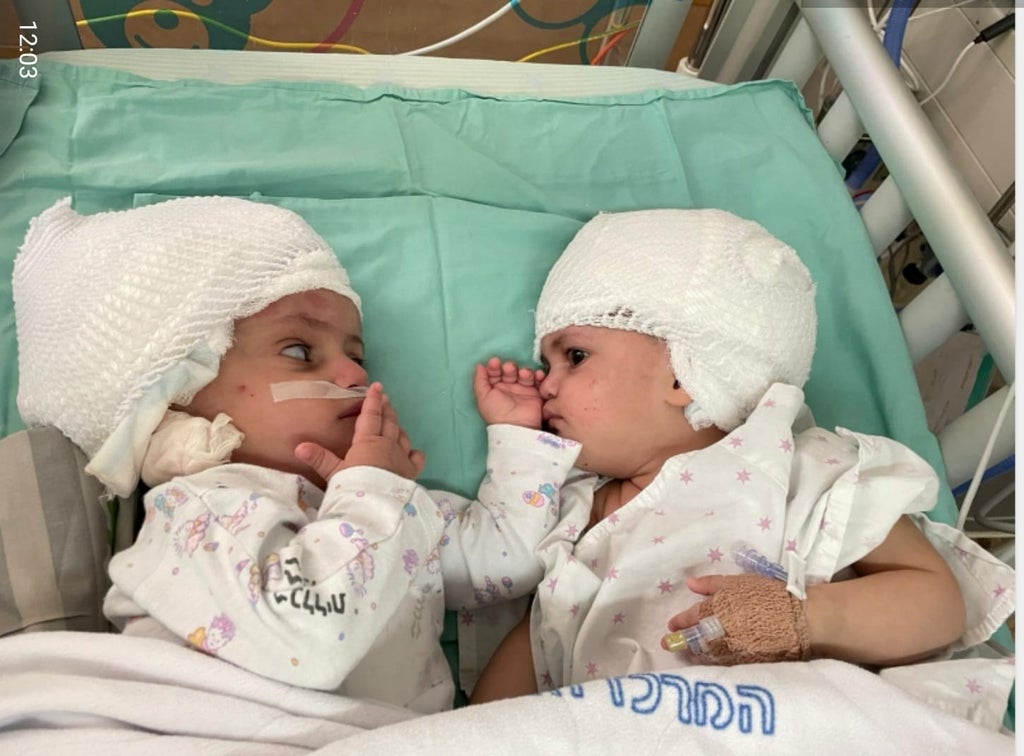 One-year-old twins who were conjoined at the back of the head have seen each other for the first time after they were separated in a rare surgery in Israel.

The complex 12-hour procedure which involved dozens of experts from the country and abroad was conducted at the Soroka medical centre Beersheba on Sunday after months of preparation.

“They are recovering nicely. They are breathing and eating on their own,” Eldad Silberstein, the head of Soroka’s plastic surgery department, told Israel’s Channel 12 news.

It was the first time that the rare and complex surgery was performed in Israel, and only the 20th time it has been conducted in the world, said Mickey Gideon, Soroka’s chief paediatric neurosurgeon.

The heartwarming moment the two girls laid eyes on each other for the first time was captured on camera by Reuters.

Dr Isaac Lazar, director of the paediatric intensive care unit at the hospital, told The Times of Israel: “When the nurses brought the babies together, newly separated, they looked at each other, made noises, and gently touched each other — it was beautiful,”

“You could see the communication between them, and it was just so special,” he said, adding that it was “life and death surgery” for the girls because one wrong move could have led to uncontrollable bleeding to major blood vessels in the babies’ heads.

After the separation, the twins underwent cranial reconstruction and scalp graft procedures.

According to the doctor, the team grew additional skin on the babies’ heads to use for the grafting procedure by inserting inflatable silicone bags between the scalp and the skull to grow the skin.

“Every few days, sterile water was injected into the bags, increasing their volume,” Dr Lazar explained. “This stretched the skin slowly. After five to six months, these water-filled bags and the skin covering them became as big as the babies’ heads, and it looked like each baby had two heads.”

The girls were born in August 2020 and will likely lead normal lives after the procedure, doctors say.