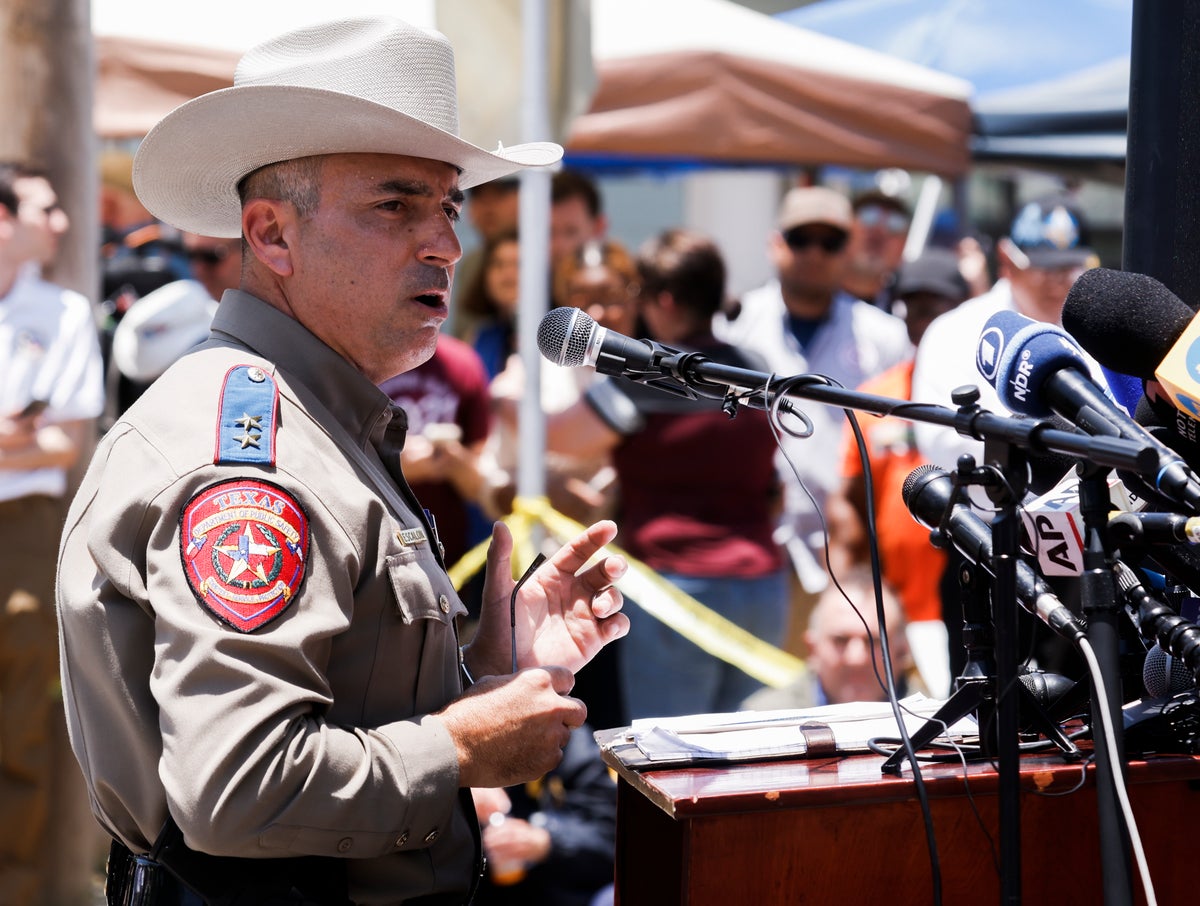 The 18-year-old gunman who killed 19 children and two teachers in an elementary school in Uvalde, Texas “walked in unobstructed” and was not “confronted by anybody” despite initial police reports suggesting an armed officer was on the campus at the time, according to police.

“It was reported that a school district police officer confronted the suspect,” a statement that is “not accurate” according to Victor Escalon, a regional director with the Texas Department of Public Safety, contradicting earlier reports.

“He walked in unobstructed initially,” he said during a press conference from Uvalde on 26 May, two days after the massacre. “He was not confronted by anybody.”

A door to the school also was unlocked, according to Mr Escalon.

Officials at the chaotic press conference – presenting a drastically different account than in the wake of the killings – were not able to answer why it took officers more than one hour to breach the fourth-grade classroom that Salvador Ramos entered.

“They don’t make entry initially because of the gunfire they’re receiving,” according to Mr Escalon.

Officials had previously said that a school police officer confronted Ramos and fired their weapon at him. Then officials said the officer had only encountered Ramos.

According to Mr Escalon, neither account is accurate – not only did no officer confront Ramos, there was no officer on campus.

Earlier this week, Travis Considine, spokesman for the Texas Department of Public Safety, claimed the gunman “encountered” an officer outside the school and “they exchange[d] gunfire”. Officials have not explained the contradictory statements.

According to a timeline proed by officials, Ramos shot his grandmother in the face then wrecked a pickup truck outside the school at 11.28am on 24 May.

He exited from the passenger’s side of the truck with an AR-15-style rifle and a bag of ammunition, then fired towards two people near a funeral home across the street. He walked towards the school, climbed a fence into the parking lot and fired “multiple” rounds, according to Mr Escalon.

Ramos entered through an unlocked door at Robb Elementary School at roughly 11.40am, and “numerous rounds are discharged in the school”, Mr Escalon said.

Officers with the Uvalde Police Department and Uvalde Consolidated Independent School District arrived roughly four minutes later and moved back to “get cover” after hearing gunfire.

“During that time, they approach where the suspect is at,” according to Mr Escalon. “They don’t make entry initially because of the gunfire they’re receiving.”

The officers are “making these calls to get help, they’re also evacuating students, teachers”, he said. “There’s a lot going on.”

At 12.17pm, the Ulvade school district posted messages on social media warning that an active shooter was on the elementary school campus and that law enforcement had arrived.

Over the next hour, parents and bystanders began to surround the school, urging police to enter and save their children.

The details shared on Thursday at a press conference in front of the school – on what would be the last day before summer break – sought to fill in the gaps of information between the beginnings of the massacre and the gunman’s death, shortly after 1pm, when a sharpshooter with the United States Border Patrol tactical team fatally shot Ramos.

But the critical hourlong gap in the timeline – which law enforcement officials say they are still putting together, after reviewing surveillance tape and speaking with victims and witnesses – points to lingering questions about when exactly the shooting began, why police failed to stop the gunman, and whether Ramos had “barricaded” himself inside the classroom before or after killing the children inside.

There were reports of gunshots as late as 12.52pm.

Javier Cazares, whose 9-year-old daughter attended the school, said he huddled near its front door with a group of men when they heard gunfire inside.

“There were five or six of [us] fathers, hearing the gunshots, and [police officers] were telling us to move back,” he told The Washington Post. “We didn’t care about us. We wanted to storm the building. We were saying, ‘Let’s go’ because that is how worried we were, and we wanted to get our babies out.”

Declaring Curry and Samosas Enemy No. 1 to Whip the Police Into Shape