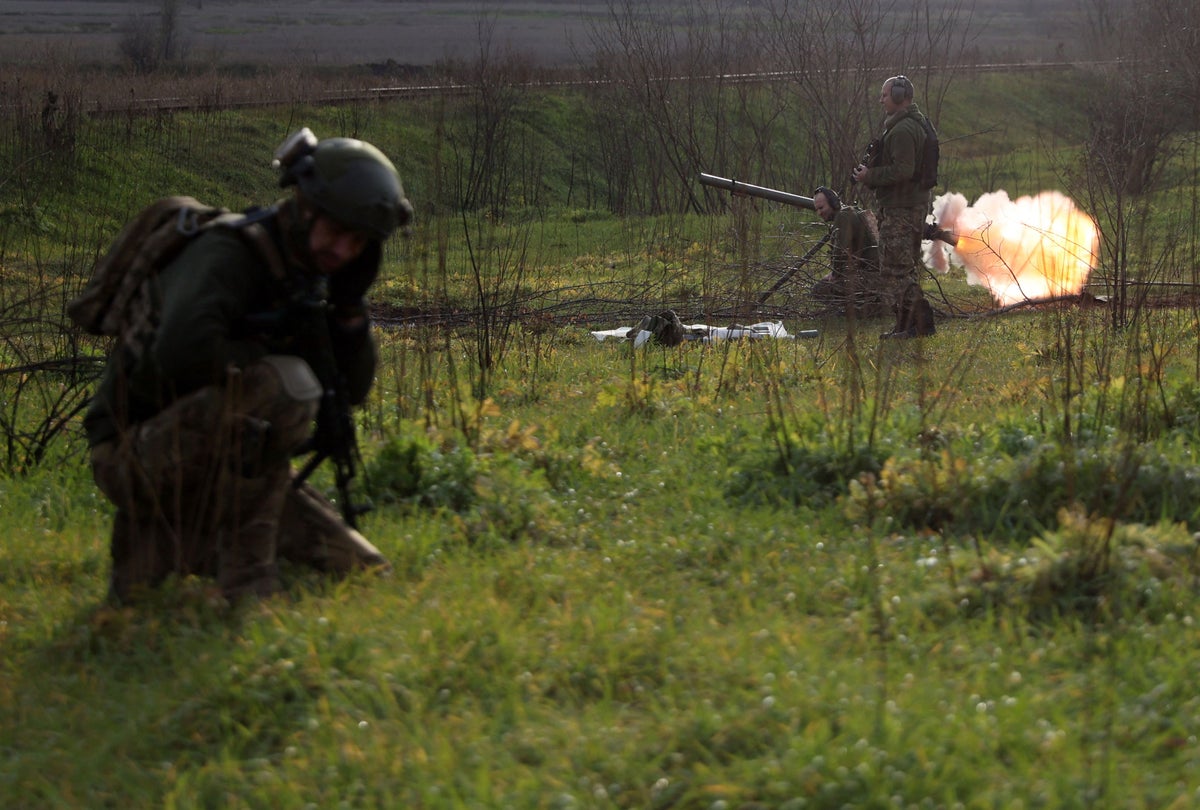 Britain will now send helicopters to Ukraine for the first time since the war began, the British defence ministry has said.

Defence secretary Ben Wallace said it will be the first time piloted aircraft are being sent to the war-torn nation since Russia’s invasion in February this year.

This comes as Volodymyr Zelensky confirmed that the situation on the battle frontlines has not changed but his troops are bolstering their positions in Luhansk.

Elsewhere, a newborn baby has been killed in a Russian missile strike on a maternity hospital in Zaporizhzhia oblast, regional governor Oleksandr Starukh said today.

The infant is the latest casualty in the Russian invasion of Ukraine which has now passed nine months and is heading into a harsh winter, with Russian forces deliberately knocking out a majority of the country’s power grid.

Much of Ukraine has been covered in snow over the past week as Mr Zelensky warned that the country does not have enough power supply to meet the existing demand.

An estimated 85,410 Russian soliders have been killed since Vladimir Putin launched his invasion of Ukraine on 24 February, Kyiv figures show.

This would bring the total number of Moscow personnel losses up by 410 troops from Tuesday.

The data shared by the Armed Forces of Ukraine cannot be independently verified.

A Russian foreign ministery official has characterised Ukraine as “godless”, “wild” and “immoral” for its raid on an old Orthodox Christian Monastery in Kyiv.

The site is a Ukrainian cultural treasure and the headquarters of the Russian-backed wing of the Ukrainian Orthodox Church that falls under the Moscow Patriarchate.

This morning, foreign ministry spokeswoman Maria Zakharova said there was no justification for the raid and compared the “Kyiv regime” to Bacchus, the Roman god of wine whose name is often associated in Russian with immoral mayhem, chaos and revelry.

“This is just some kind of total godless Bacchanalia. There is no justification or explanation for this. And there cannot be,” Ms Zakharova told Sputnik radio.

“This is another part of the absolutely immoral and wild actions of the Kyiv regime.”

A Russian missile struck a maternity ward in the early hours of Wednesday morning in the city of Vilniansk, Zaporizhzhia, the region’s governor has said.

A newborn baby was killed in the attack, Oleksandr Starukh added.

“Grief fills our hearts,” he said.

Mr Staruk shared a series of images of the destruction via the Kyiv Independent:

Russia is ready to increase its fertiliser exports, the TASS news agency has cited president Vladimir Putin as saying.

Moscow is pushing for the West to ease sanctions which it says complicate Russia’s ability to ship fertilisers and agricultural products around the world, and which Moscow says are aggravating a global food crisis.

1669186893Russia has likely exhausted its stock of Iranian drones – MoD

No drone strikes have been publicly reported since around 17 November, it said.

These have been a mixture of one way attack (OWA) UAVs and more traditional reusable armed systems,” the MoD said in its latest intelligence update today.

It added that the Russian forces have largely used these weapons against tactical military targets and the Ukrainian electricity grid.

“However, recently Russian commanders likely also wanted Iranian-sourced UAVs to prioritise medical facilities as targets of opportunity, and strike them with guided munitions if identified,” the ministry said.

The ministry said that it is likely that Russia conceived the UAV campaign to “make up for its severe shortage of cruise missiles, but the approach has had limited success.”

Most UAVs launched have been neutralised by Ukraine, it added.

“No OWA UAVs strikes have been publicly reported since around 17 November 2022. Russia has likely very nearly exhausted its current stock, but will probably seek resupply.”

Russia can probably procure UAVs from overseas more rapidly than it can manufacture new cruise missiles domestically, the MoD claimed.

The British defence ministry has said it will send helicopters to Ukraine for the first time since the war began.

Defence secretary Ben Wallace said it will be the first time piloted aircraft are being sent to the war-torn nation since Russia’s invasion in February this year.

The MoD’s military assistance to Ukraine includes three former Sea King helicopters — the first of which has already arrived in Ukraine.

Dozens of Ukrainians stepped out in the streets of Horenka village to collect food on Tuesday. Behind them in the background, the iconic work of British artist Banksy can be seen in the ruins of a bombed-out building.

Last week, Banksy peppered photos on his Instagram page of the artwork in Borodyanka, northwest of Ukraine’s capital and some others from Horenka and Irpin.

A separate mural of a gymnast in black and white has been painted in a way that she looks like she is doing her handstand on the crumpled remains of concrete blocks that poke out of the blackened wall. Towering above her are the gutted, blown-apart innards of what were once apartments.

Members of public queue for food beside a picture by graffiti artist Banksy on a the wall of a destroyed building in Horenka, Ukraine

Hundreds of Ukrainian hospitals and healthcare facilities are on the verge of breakdown as they lack fuel, water and electricity, the World Health Organisation has said.

“Ukraine’s health system is facing its darkest days in the war so far. Having endured more than 700 attacks, it is now also a victim of the energy crisis,” WHO regional director for Europe Hans Kluge said after visiting Ukraine.

This winter will be life-threatening for millions of people in Ukraine, the top official warned.

Ukraine is facing a therma-crisis on top of a perma-crisis brought on by the war and the pandemic, the official said.

Last week, the Kremlin spokesperson Dmitry Peskov said that Russia’s strikes on energy infrastructure are a consequence of Kyiv being unwilling to negotiate.

Ukraine has objected to a football scarf worn by the Hungarian prime minister Viktor Orban showing an outline of “Greater Hungary”, the country’s former imperial territories.

Prime minister Viktor Orban met a Hungarian footballer while wearing the scarf, which the outlet Ukrainska Pravda said depicted a map of Hungary including territory that is now part of the neighbouring states of Austria, Slovakia, Romania, Croatia, Serbia and Ukraine.

Ukrainian ministry spokesperson Oleg Nikolenko said the country demanded an apology and a rebuttal of any Hungarian claims on Ukrainian territory.

Volodymyr Zelensky has said that the situation on the battle frontlines has not changed but his troops are bolstering their positions in Luhansk as massive territorial warfare grips Ukraine’s eastern edges.

“The situation on the frontline has not changed over the past day. In all areas of the front, the same dynamics as in the previous days is maintained. Donetsk region – fierce attacks, constant shelling. I thank all our heroes, who courageously hold out despite everything!,” Mr Zelensky said in his nightly address yesterday.

“Kherson region and other territories of the south – we are doing everything to reduce the combat potential of the occupiers and eliminate their ability to carry out shelling of our cities,” Mr Zelensky said.

He also said that Ukrainie will bring the Russian army to new defeats step by step, and “no shelling of Kherson or any of our cities will help the occupiers.”