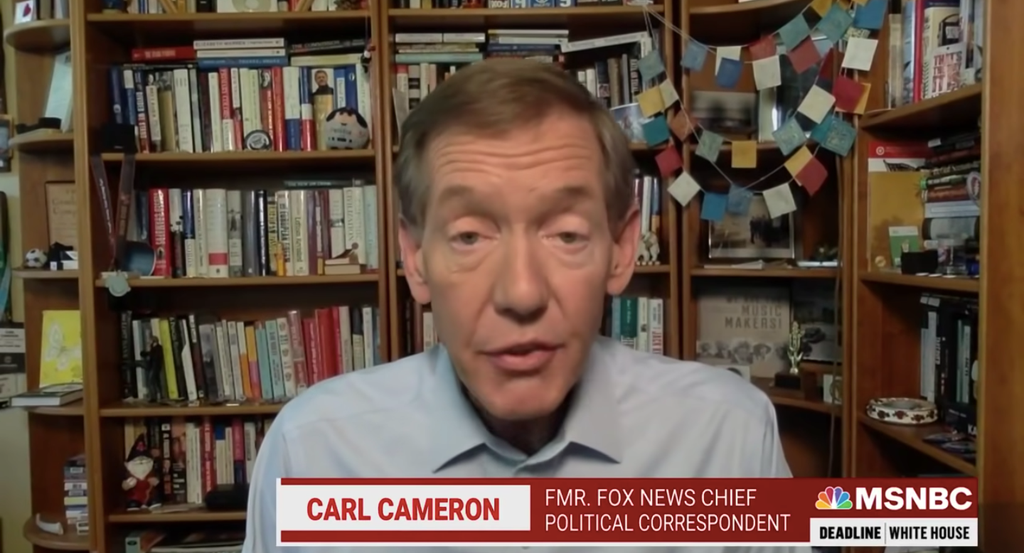 An ex-Fox News reporter says Joe Biden should be “taking some names and putting people in jail” over the right-wing’s great replacement theory.

Carl Cameron told MSNBC that he believes his former employer and star host Tucker Carlson participate in the same kind of dangerous rhetoric that reportedly inspired the mass shooting in Buffalo.

Ten people were killed and three wounded by a teenage gunman during the allegedly racially-motivated attack in the New York city over the weekend.

MSNBC’s Nicole Wallace asked Cameron, who was a chief political correspondent for Fox News until 2017, how “the ideology left in the mass shooter’s screed” seemed to echo that aired on Carlson’s show.

The New York Times, for instance, found that the primetime host’s top-watched political programme has addressed the issue of demographic “replacement”, in his own words, on hundreds of episodes totalling more than 50 hours of content.

The MSNBC host bluntly asked Cameron how Fox News reacted “when something like this happens?”

Cameron replied that he couldn’t “imagine” what was going through top executives’ minds and added that this sort of flare up was “partly why I ended up getting out of there”.

“It really is kind of horrible to think that journalists with national and international capacity are putting together this type of nonsense,” he explained.

“We got to watch out because the Republicans have become the purveyors of misinformation, and when our two-party system is broken like that, democracy is seriously in trouble,” he said, adding that the president needed to start “taking some names and putting people in jail”.

Mr Cameron’s exit from Fox News in 2017 was announced as a retirement at the time, but the network issued a scathing statement about him in 2019 when he commented somewhat critically on the state of the network amid the exit of Shepard Smith, its longtime afternoon news anchor.

“Carl Cameron left the network because he was no longer able to show up to work each day – he has a very short memory for our endless compassion, patience and graciousness in dealing with his multitude of personal struggles,” a spokesperson said at the time.

On Saturday, Mr Cameron had more criticism for his former bosses during an appearance on CNN.

Claiming that Mr Carlson in particular was “screaming fire in a crowded movie house”, a euphamism for deliberately inciting panic, Mr Cameron claimed that law enforcement was going to have to take action against his former network.

“And that kind of stuff absolutely has to stop, whether it’s the antitrust bill to take down and deplatform people who lie and put out falsehoods that cause damage and violent, violent hate — there ought to be something done about it,” Mr Cameron said.

The great replacement theory, which has been cited as being partly what inspired the accused Buffalo mass shooter, is a racist theory that Democrats want to supplant white Americans with Hispanic voters and other immigrants of colour.

Cameron, though he didn’t explicitly state that he believed Carlson has directly quoted this theory on the show, but slammed him for hosting what he considers to be other dangerous lies and mistruths.

“I really can’t channel how Tucker believes in any of this stuff and how the network can go through with it,” he said. “I will say this, however, it is very clear that this type of lying and deception is catching on.

The Independent has reached out to Fox News for comment.

Mr Carlson has denounced political violence on-air, including in the days immediately following the January 6 attack.

“[W]e’ve been against, obviously, violence and terrorism since the day the show went on the air,” the primetime host said at the time.

On the Monday night segment of his evening broadcast, Carlson acknowledged that the violent screed written by the accused Buffalo shooter was “definitely racist, bitterly so” and similarly condemned the violence.

He did, however, take issue with labelling the 180-page document written by shooting suspect Payton Gendron as a racist manifesto.

“Gendron reduces people to their skin colour and that’s the essence of racism and it’s immoral. But what he wrote does not add up to a manifesto,” he said, noting that it wasn’t “a blueprint for a new extremist political movement” but rather “a rambling pastiche of slogans and Internet memes, some of which flatly contradict one another”.

In recent days, a compilation of the Fox News host touting the ideas pushed by the great replacement theory has gone viral on social media.

“So I know that the left and all the little gatekeepers on Twitter become literally hysterical if you use the term ‘replacement’, if you suggest the Democratic Party is trying to replace the current electorate, the voters now casting ballots, with new people, more obedient voters from the third world,” Carlson begins the segment.

Cameron’s remarks arrived just as Senate Majority Leader Chuck Schumer sent a letter to Fox News executives urging them to stop amplifying the “Great Replacement theory”, asking them to “cease and desist” with parroting the dangerous ideas on mainstream shows, such as Carlson’s.

Putin and Peter the Great: Russian leader likens himself to 18th Century tsar