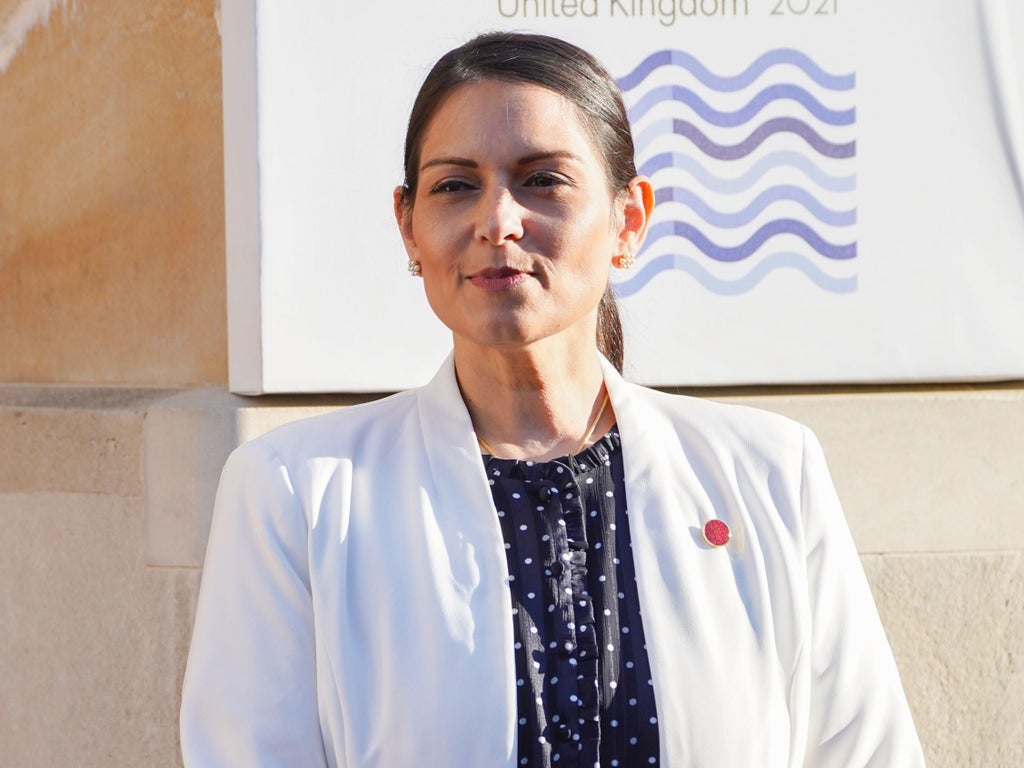 Priti Patel is set to anger France by sanctioning plans to forcibly redirect migrant boats back across the Channel despite warnings the controversial tactic would deepen a rift in relations.

The home secretary is understood to have ordered officials to rewrite the UK’s interpretation of maritime laws to allow Border Force to turn boats around, forcing them to be dealt with by the French authorities.

It comes following a G7 interior minister’s meeting on Wednesday, during which Ms Patel told her French counterpart that the British public “expect to see results” from French efforts to prevent crossings.

Members of Border Force are being given special training to handle migrant boats, but would only deploy the “pushback” tactics when deemed practical and safe to do so, according to several reports.

Asked about government plans, health minister Helen Whately did not deny boats would be turned back – saying the government wanted to “deter” migrant crossings and was “looking at all the options”.

“The government looks at all the options,” she told Sky News on Thursday. “You wouldn’t want to put people in any greater danger, they’re taking a dangerous journey as it is. What we want to do is actually deter them from starting that journey in the first place.”

Reports suggested such operations were likely to be restricted to bigger migrant boats and only used in “very limited circumstances”, with the tactic ultimately up to the captain of any British vessel involved.

Ms Patel and the French interior minister, Gerald Darmanin, held discussions on crossings in London in the wake of hundreds of migrants being brought ashore in Kent over the past few days.

Following her meeting with Mr Darmanin, Ms Patel tweeted: “I made clear that delivering results and stopping crossings were an absolute priority for the British people.”

But the French government warned that the newly reported turnaround tactics would have “a negative impact on our co-operation”.

In a letter seen by The Independent, Mr Darmanin told Ms Patel: “The French position on intervention at sea remains unchanged. Safeguarding human lives at sea takes priority over considerations of nationality, status and migratory policy, out of strict respect for the international maritime law governing search and rescue at sea.”

The French minister added: “The use of maritime refoulement [pushbacks] to French territorial waters would risk having a negative impact on our cooperation.”

The French interior minister also rejected a UK request to set up a joint command centre in northern France, with police and border force officers from both countries patrolling the coastline and the Channel.

Campaigners have previously described the pushback plans, first outlined in July, as both illegal and “morally wrong”. Charities urged the Home Office to take a “more humane and responsible approach”.

Labour said the idea of pushing boats back as “risked lives,” and accused Ms Patel of failing to tackle the people-trafficking gangs at Calais.

“Turning boats around at sea in the world’s busiest shipping channel is dangerous and risks lives,” said shadow home secretary Nick Thomas-Symonds. “That the home secretary is even considering these dangerous proposals shows how badly she has lost control of this situation.”

Conservative MP Tim Loughton, a member of the home affairs select committee, said the idea of turning boats back towards France was unworkable.

Mr Loughton added: “Any boats coming up alongside at speed would capsize most of these boats anyway, and then we’re looking at people getting into trouble in the water and inevitably drowning … and then of course we will get blamed.”

It comes just days after Ms Patel is said to have told MPs she is prepared to withhold millions of pounds of cash promised to France to help step up patrols unless an improvement in the number of migrants intercepted by French authorities is seen.

Earlier on Wednesday, prime minister Boris Johnson said efforts to stop the crossings depended “to a large extent” on the ability of the French authorities.

According to the Home Office, 785 migrants arrived in the UK on Monday after making the journey from France in small boats. This is the second highest daily total of the year, following the single-day record of 828 people set last month.

The crossings continued on Tuesday and Wednesday during the better weather conditions, with boats arriving at Dover and others being towed on to beaches along the south coast.

Migrants are escorted to shore in Kent

Earlier this year, the UK and France announced an agreement to more than double the number of police patrolling French beaches. It was the second pledge of its kind in a year, in a bid to stop small boats from leaving France.

As part of the deal, the government pledged to give France £54m to support its efforts to stop small boat crossings. Pierre-Henri Dumont, who represents Calais in the French National Assembly, told the BBC: “Nothing can stop them”.

He added: “The fact is, we’ve got 300 to 400 kilometres of shore to monitor every day and every night and it’s quite impossible to have police officers every 100 metres because of the length of the shore.”

At least 13,000 people have now made the crossing to the UK in 2021, according to data compiled by the PA news agency.

Illegal migration is anticipated to be the subject of focus for the final day of the G7 meeting on Thursday.

France recalls US ambassador in protest at Australia submarine deal

COVID-19: France suspends thousands of health workers ‘without pay’ after they fail to get vaccinated |