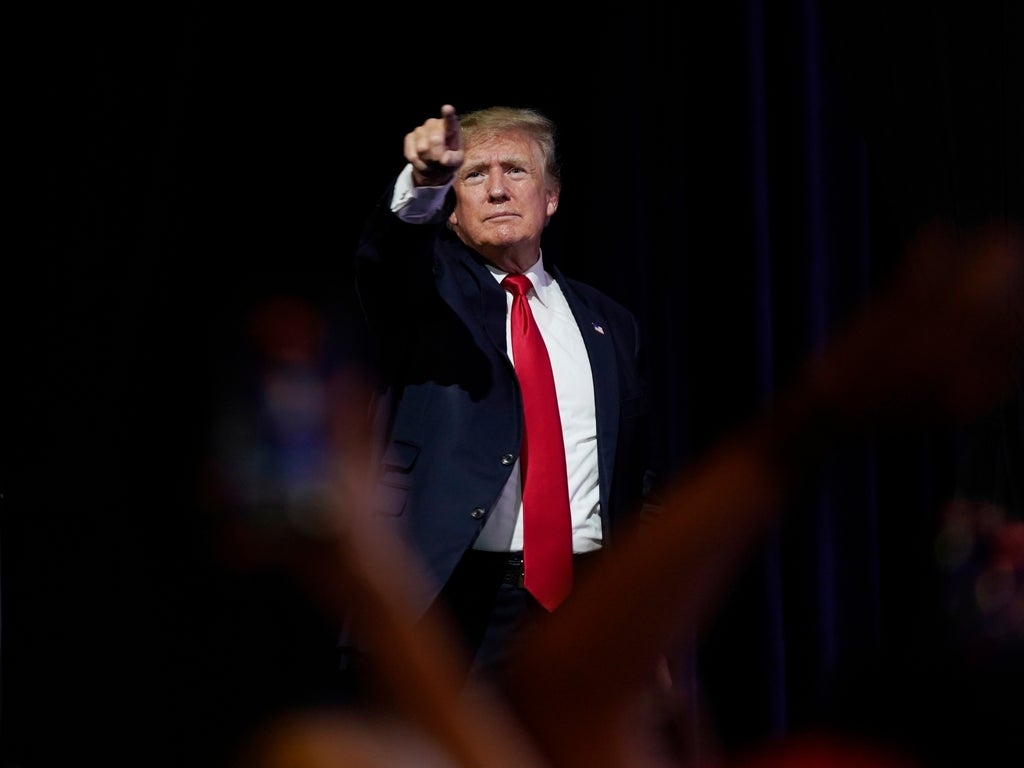 Donald Trump pleased thousands of his political supporters on Saturday night when he returned to Arizona for a rally, delivering a near two-hour speech focused on bashing the Democrats and stirring up trouble with the Taliban.

Referring to the organisation’s leader, Mawlawi Hibatullah Akhundzada, the former US president appeared to forget his name – instead telling the 5,000-strong crowd he would just “call him Mohammed”.

Citing America and Nato’s withdrawal agreement from Afghanistan, Mr Trump said: “I told the Taliban leader, I spoke to the leader and I said – let’s call him Mohammed – I said, ‘Mohammed, we’re leaving.’”

He went on to impersonate Akhundzada, performing a series of grunts to the jeering crowd, telling them: “He’s a rough man.”

Mr Trump characteristically used the Turning Point Action gathering to blast the “disgraceful” 2020 election, repeating previous and already debunked claims about votes being “stolen” from him.

“Joe Biden and the radical Democrats are wrecking our nation,” he said. “I don’t even believe it’s him. I don’t think Joe knows where the hell he is.”

Speaking from Phoenix, Arizona, Mr Trump claimed his party “won the state [at last year’s election] … and won it decisively”, when in actual fact the Republicans lost Arizona by less than 11,000 seats – making Mr Biden the first Democrat to win the “red state” since 1996.

“In my opinion, there’s no way [Democrats] win elections without cheating,” Mr Trump went on to say before claiming he “could handle” losing an election – but only if it was won fairly.

“If I lost this election, I could handle it pretty easily [but] when they steal it from you and rig it, that’s not easy and we have to fight,” he told the crowd as they began to cheer and stand. “We have no choice, we have to fight.”

However, on a night many believed he would announce plans for a political comeback at the 2024 presidential election, Mr Trump stopped short of making any such promise. Instead, he moved to criticise his opponent Mr Biden’s first few months in the Oval Office.

“They’re saying it was the worst [first] six months in the history of the presidency,” he said – without explaining who “they” are.

Repeating one specific accusation he previously made against ballot counters in Georgia – another state Mr Biden took from Mr Trump in the election – the former president said there were thousands of illegal ballots hidden “under the skirting of tables” and included in the official count.

Mr Trump is likely referring to a taken during the election at a counting facility at the State Farm Arena, in Fulton County, suggesting it reveals fraudulent activity by election workers.

The footage shows officials returning to their counting areas and a container with ballots being pulled out from under a table. But election officials have previously responded to this accusation, saying the footage shows normal practice.

“[The ballots] weren’t in boxes that ballots come in, though, they were in others, whether it was suitcases or something different, and [counters] took those and they started putting them in [the official boxes] – sometimes three times, sometimes five times,” Mr Trump told the Arizona crowd last night. “And I’ll tell you what, when people looked at that [] they got sick, people threw up looking at it – and law enforcement did very little.”

He then claimed “the courts” were in the process “of doing something about it” – “it’s a big thing going on,” he said – though it is unclear if this is true.

Last year, when Mr Trump first alleged the “criminal behaviour” had taken place, Georgia’s voting system implementation manager, Gabriel Sterling, refuted the claim in a tweet. Meanwhile, an official investigation found “the entire security footage revealed there were no mystery ballots that were brought in from an unknown location and hidden under tables”.

Fulton County elections director Richard Barron added at the time workers “put those ballot bins under their workspace because it’s the most convenient place to put those things”.

Turning to coronavirus – an issue considered to be the main reason he lost his bid for re-election – Mr Trump said not only that he “came up with the vaccine” but that he believed in people’s “freedoms” if they did not want to take it.

“What about the vaccine? I came up with vaccine. They said it’d take three to five years – it’s going to save the world. I recommend you take it but I also believe in your freedoms 100 per cent,” he said.

Finishing by congratulating himself, Mr Trump added: “But just so you understand, [the vaccine] was a great achievement.”

His nonchalant attitude towards the nation’s vaccine rollout comes amid fears Co is tightening its grip across all 50 states, after the US reported an average of around 43,700 new cases per day last week. This is up 65 per cent from the previous seven days and nearly three times as high as the level two weeks ago, data compiled by Johns Hopkins University shows.

Infections hit a 15-month low in late June before they began to rise again, with fewer people taking up the vaccine and the more infectious Delta variant sweeping across the country being blamed.

So far, 340 million doses of a coronavirus vaccine have been administered in the US – 162 million of which were second jabs, according to the latest government data. The figures also show that, as of this week, there have been over 610,000 Co-related deaths in the US.

Britain was a world leader in travel. Not anymore