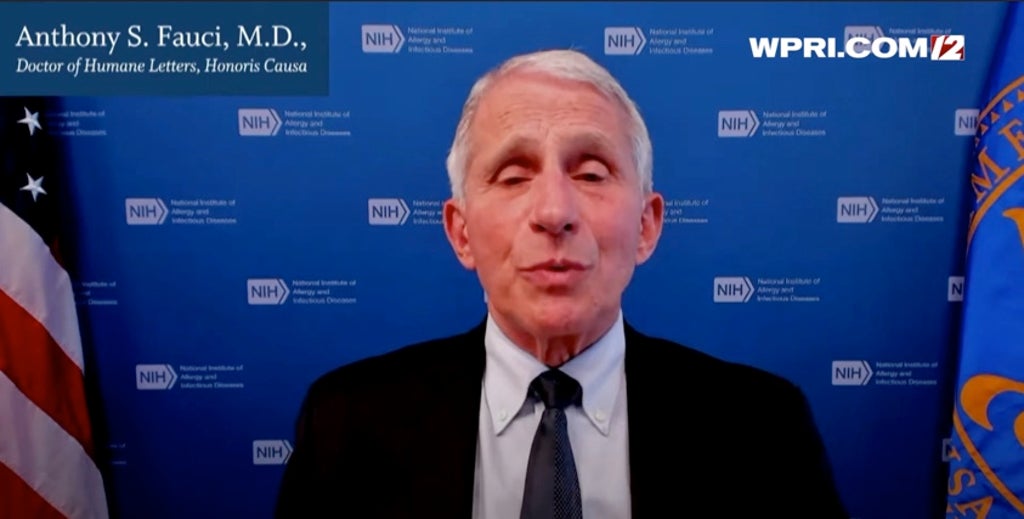 Dr Anthony Fauci has issued a stark warning that society is in “decline” because of the spread of disinformation and propaganda.

The nation’s top infectious disease expert told graduates of Roger Williams University on Friday that the Co-19 pandemic had laid bare the “normalisation of untruths” and the “divisiveness” across the US.

He urged the audience to “reject the politicisation of science” and the “outright lies” that pose a “danger” to the country.

“It is our collective responsibility to not tacitly accept the normalisation of untruths because, if we do, we invite dangers to ourselves, our families, our communities and our country,” he warned.

“This is how a society declines into a way of life where veracity becomes subservient to propaganda rather than upheld as a guiding principle for creating and sustaining a just social order.”

Dr Fauci, who has headed up the federal Co-19 response under both presidents Donald Trump and Joe Biden, was asked to deliver the keynote speech at the Rhode Island college’s commencement ceremony.

During the speech, which he delivered remotely because he was attending a memorial service for a family member, Dr Fauci told the graduates that the “normalisation of untruths” had become a “great concern” to him.

He said the seriousness of the issue had been “made painfully eent” to him during the pandemic.

“During the COVID-19 pandemic, I have experienced firsthand something that has troubled and saddened me — a deepened divisiveness in our nation,” he said.

“Unfortunately, differences of opinion or ideology are sometimes propped up by deliberate distortions of reality to the point of fabrications, conspiracy theories, and outright lies.

“Segments of our society have grown increasingly inured to such falsehoods yet the outrage and descent against that alarming trend has been relatively muted and mild.”

Dr Fauci urged the graduates to use the analytical skills they have learned during their time in education “to discern and challenge weak assertions and renounce pronouncements built on untruths”.

“Reject the politicisation of science that denigrates eence and facts,” he called on them.

“Or country will not prosper if we let indifference to these transgressions enable moral ambiguity.”

The top doctor has been forced to fight back against conspiracy theories ever since the pandemic began, with right-wing personalities still pushing baseless claims about the vaccine to the American people.

Dr Fauci, who was awarded an honorary degree during the commencement, also described how the pandemic had highlighted the health inequities in the US, taking its toll most on low-income communities of colour.

“Let not our collective memory of the health inequities revealed during this pandemic fade, rather let it motivate us to undertake the long-term commitment that will be required to address the root causes of health disparities,” he said.

“I strongly urge you to be part of that effort.”

Friday’s speech came one day after he delivered another commencement address at the University of Maryland, Baltimore, where he echoed his comments about the healthcare inequities exposed by the pandemic.

Dr Fauci said that communities of colour were hardest hit because of “standing inequities that have undermined the physical, social, economic and emotional health of racial and ethnic minorities” and he urged graduates to stay focused on tackling this inequality even now the country is emerging from the pandemic.

“Let us promise ourselves that our corporate memory of the tragic reality of the inequities experienced with Co-19 does not fade as we return to our normal, new life,” he said.

“It will take decades-long commitment for society to address these disparities. I strongly urge you to be part of that commitment.”