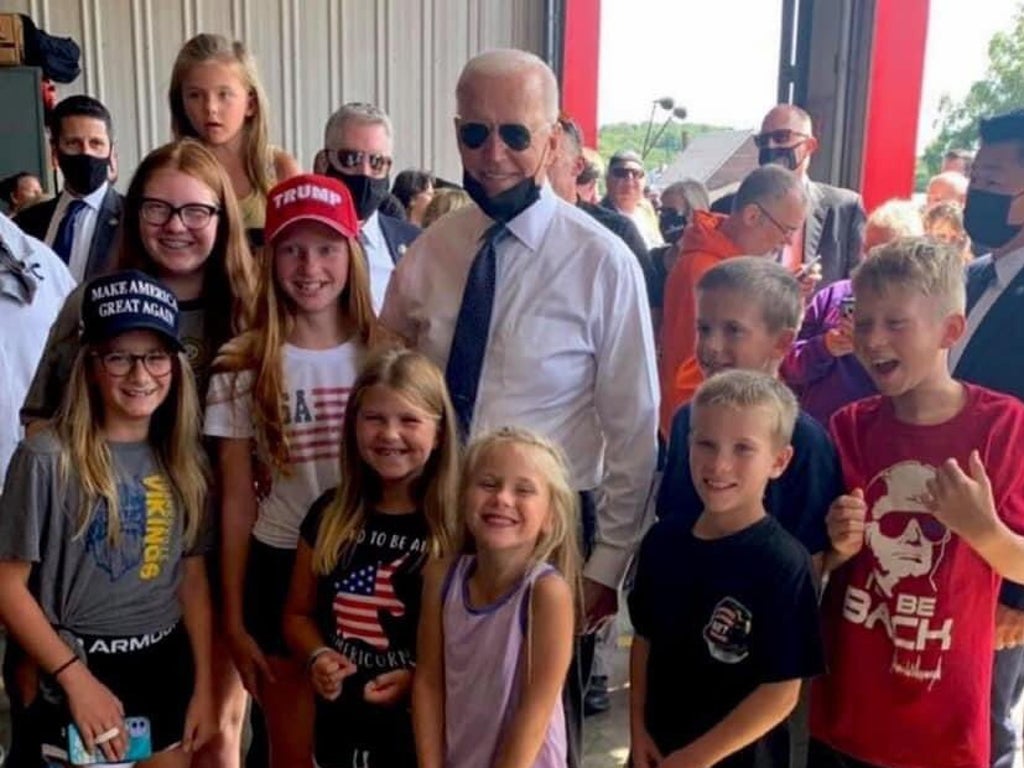 President Joe Biden has denied being duped into posing for a photo with children wearing MAGA hats.

Images of Mr Biden standing for a photo with children wearing pro-Trump merchandise went viral after the president attended a 9/11 memorial ceremony on Saturday in Shanksville, Pennsylvania, where a plane believed to be headed for the US Capitol or the White House crashed in a field after passengers decided to storm the hijacked cockpit on 11 September 2001.

Arizona State Senator Wendy Rogers posted the image to Twitter and made the baseless claim that former President Donald Trump won the 2020 election.

Several right-wing pundits and websites claimed that Mr Biden had been tricked into posing with the kids or was unaware that they were wearing pro-Trump clothing.

But Biden said he was actively posing with the kids to underline his message of unity.

“I think the real issue for those kids that, just had a picture taken with, couple of them had Trump hats from last year, I think, for them, it’s going to be: Are we going to, in the next four, five, six, 10 years, demonstrate that democracies can work, or not?” Mr Biden told reporters at the Shanksville Volunteer Fire Company.

“There’s a lot of autocrats who truly believe that democracies can’t function in the 21st century. Not a joke,” the president added. “They think because the world is changing so rapidly and people are so died, you can’t bring people together in a democracy to get a consensus, and the only ones that are going to be able to succeed are the autocrats.”

“Everybody says, ‘Biden, why do you keep insisting on trying to bring the country together?’ That’s the thing that’s going to affect our wellbeing more than anything else: how the rest of the world responds to us, knowing that we actually can, in fact, lead by the example of our power again. And I think we can do it. We got to do it,” he said.

The president at the time of the 9/11 attacks, Republican George W Bush, said at the Flight 93 memorial in Shanksville on Saturday that the post-attack unity he saw back then was “the America I know”.

“At a time when religious bigotry might have flowed freely, I saw Americans reject prejudice and embrace people of Muslim faith. That is the nation I know,” he said.

“At a time when nativism could have stirred hatred and violence against people perceived as outsiders, I saw Americans reaffirm their welcome to immigrants and refugees. That is the nation I know,” he added. “At a time when some viewed the rising generation as indiualistic and decadent, I saw young people embrace an ethic of service and rise to selfless action. That is the nation I know.”

Taliban co-founder Baradar disputes internal rifts, denies he was injured in any clash