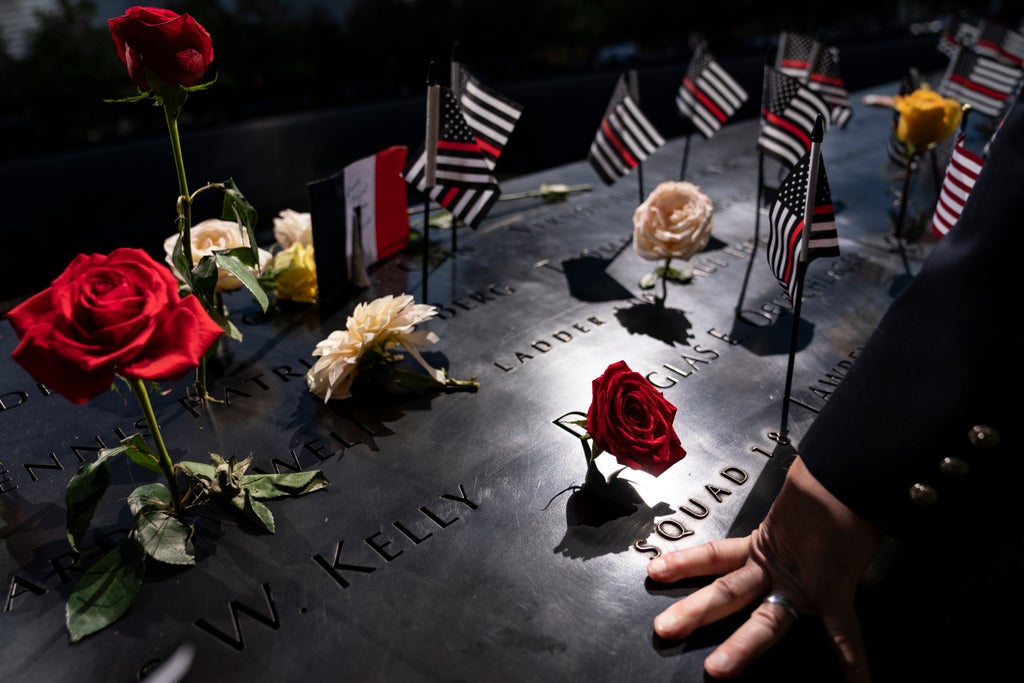 SEPT-11-20TH-ANNIVERSARY — The world solemnly marked the 20th anniversary of 9/11 on Saturday, grieving lost lives and shattered American unity in commemorations that unfolded just weeks after the bloody end of the Afghanistan war that was launched in response to the terror attacks. Victims’ relatives and four U.S. presidents paid respects at the sites where hijacked planes killed nearly 3,000 people in the deadliest act of terrorism on American soil. By Jennifer Peltz and Bobby Caina Calvan. SENT: 1,150 words, photos. With SEPT-11-BUSH — Bush warns of domestic extremism, appeals to ‘nation I know’ (sent).

SEPT-11-DOCUMENTS — The FBI late Saturday released a newly declassified document related to logistical support given to two of the Saudi hijackers in the run-up to the Sept. 11, 2001, terrorist attacks. The document details contacts the hijackers had with Saudi associates in the U.S. but does not proe proof that senior Saudi government officials were complicit in the plot. By Eric Tucker. SENT: 870 words, photo.

AFGHANISTAN — Women in Afghanistan can continue to study in universities, including at post-graduate levels, but classrooms will be gender-segregated and Islamic dress is compulsory, the higher education minister in the new Taliban government says. By Kathy Gannon. SENT: 520 words, photo.

SEPT 11-20TH ANNIVERSARY-MEDIA — Many of the media outlets that explore the country’s differences, pausing Saturday to mark the 20th anniversary of the Sept. 11 terrorist attacks, recalled almost wistfully the sense of common purpose that united Americans in the aftermath of that day. SENT: 600 words, photos.

SPORTS-SEPT 11-ANNIVERSARY — The Mets and Yankees held a Subway Series game on Sept. 11 for the first time on the 20th anniversary of the 9/11 attacks, as stadium’s around the country paid tribute to the nearly 3,000 killed in the terrorist attacks. A raucous, emotional crowd packed the stadium in Flushing 45 minutes before first pitch, waving American flags and holding signs promsing to “Never Forget” during a ceremony that included over a dozen Mets players from the 2001 team. SENT: 7,420 words, photos.

MORE ON THE VIRUS OUTBREAK

VIRUS-OUTBREAK-CHINA — A city in southern China that is trying to contain a coronavirus outbreak told the public Sunday not to leave, suspended bus and train service and closed cinemas, bars and other facilities. SENT: 300 words, photo.

WESTERN-WILDFIRES — A wildfire near Castaic Saturday has led to the closure of a part of a major freeway in Southern California, officials told local media. SENT: 330 words, photos.

JAPAN-VIETNAM — Japan can now give defense equipment and technology to Vietnam under an agreement signed Saturday, as the two countries step up their military cooperation amid worries about China’s growing military influence. SENT: 330 words, photos.

TEN-US-OPEN — British teenager Emma Raducanu has beaten Canadian teenager Leylah Fernandez 6-4, 6-3 in the U.S. Open final to become the first qualifier to win a Grand Slam title in the professional era. The 18-year-old Raducanu is ranked 150th and needed to win three matches during preliminary rounds just to get into the main draw.

HOW TO REACH US